Company of the Year

George Economou’s Cardiff Marine Group, in which TMS Tankers is a member, has become the largest industrial shipping and offshore group in Greece today with a strong presence in dry bulk, tanker offshore and containers. Cardiff Marine demonstrated an ability to think and act before others and capitalise on the rapidly changing nature of the shipping markets. Through bold strategic moves such as the recent expansion into LNG the company has repeatedly delivered success stories and efficient, profitable shipping operations. 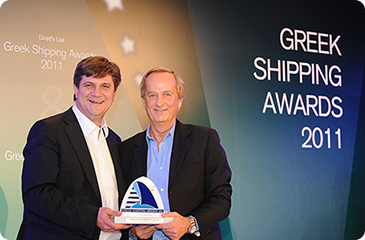 Newsmaker of the year

Mr Economou played perhaps the leading role on the side of independent owners in one of the biggest shipping stories of 2011 – the controversial charter hire spat triggered by Chinese giant Cosco. Additionaly, he sealed a string of major deals covering a variety of key maritime sectors. Behind the year’s positive tone was the commencement of operations for a fleet of four newbuilding ultra-deepwater drillships which were delivered to DryShips subsidiary Ocean Rig from Samsung Heavy Industries in the course of 2011. DryShips, listed on Nasdaq since 2005, began taking delivery of a fleet of aframax and suezmax tanker newbuildings, representing a first $770m step into the wet market. As if all this were insufficient, Mr Economou’s year included a private $1bn leap into liquefied natural gas carriers with four newbuilding orders.